The beginning of March saw Samson Academy launch a new unit: ancient Greece. We started by learning about Greek gods and goddesses. We then spent a week with the Illiad, learning how the Apple of Discord launched the Trojan War and how the Trojan Horse led to the defeat of Troy. We also learned the stories of King Midas and Pandora’s Box. The following week we read about the Odyssey and Greek theatre. Most of that week was spent writing a play The Apple of Discord, and working on our Greek masks.

The last week of the month was chock-a-block with activities! We videotaped a performance of The 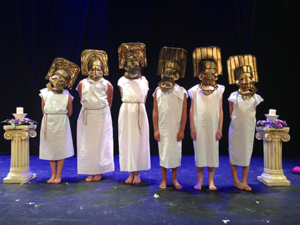 Apple of Discord – A Greek Myth. (Spoiler alert: Our students did a GREAT job!) We also learned about Greek architecture, Greek pottery, and ancient Greece as role model in using democracy as a form of government. We also read several fables from Aesop, using their morals as our copywork.

Our science for March included reviewing landforms, putting various root vegetables in water to track their growth, and learning about photosynthesis as well as bees and their role in food production.

In March, we also began a new unit on writing, first reviewing basic structure (main idea, supporting statements, conclusion) and rules of grammar (use of comma, etc.), and then writing short biographies.

For art, we began a unit on perspective, in preparation for April’s focus on landscape.

Coming in April: ancient Rome and a visit to the Museum of Fine Art!