The first week of June was the last week of the 2021/2022 academic year of Samson Academy. 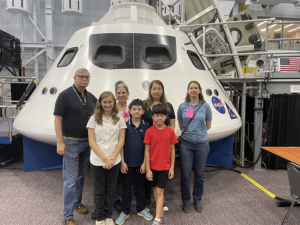 In addition to making a lap book summarizing all we had learned about space exploration, we topped off our unit with a private tour of NASA! Our favorite thing? Students agreed it was the robonaut, a space robot capable of working outside the International Space Station.

We also wrote biographies of famous blues musicians including B.B King, Robert Johnson, and Stevie Ray Vaughn. And of course we listened to their music!

The last day of school was a luncheon students prepared for their parents. After a year of cooking classes, the students moved confidently in the kitchen. It was a delicious meal!

The following week was the first session of Summer Samson! This session focused on animals of the tundra and the arctic. Penguins, walruses, and polar bears the first week; musk oxen, caribou, and peregrine falcons the second week.

We also learned about Inuit culture and made paper inukshuk. In addition, we learned about the aurora borealis, also known as the Northern Lights, and used pastel chalk to make our own version.

The last week of June was another new camp: Up Up and Away Goes to Europe. In Up Up & Away Goes to Europe we went to Italy, Spain, France, England, and Germany. For every country, we learned greetings and how to count to ten in the native language. We also learned about the music, food, and art of each country.

From the double decker buses in London to the fairy tales of the Brothers Grimm, from the music of Bach to flamenco dance, from gondolas in Venice to crepes in Paris, our tour of Europe was a rich experience and a lot of fun!