The first two weeks of August were devoted to Samson Summer Session #3: Nocturnal Animals and the Night Sky.

We studied bats, lightning bugs, possums and owls during the first week, and constellations, galaxies, comets, and the Moon during the second. Included were units on telescopes and Van Gogh’s Starry Night.

This semester for world history we are studying the Renaissance. We began by learning about the role the city of Florence and the Medici family played in the Renaissance, the artists Donatello and Michaelangelo, and the architect Brunelleschi. We also learned about the One Hundred Years War and famous explorers including Vasco da Gama and Magellan. 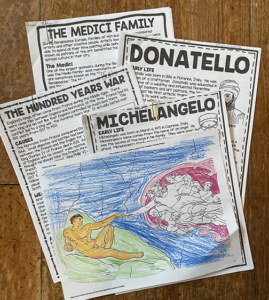 Our artist of the month was Botticelli. We also began an extensive unit on the digestive system.